Stephen Dobyns‘ new novel, The Burn Palace, is a difficult book to deconstruct. The 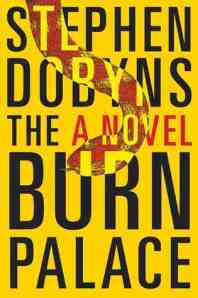 narrative is a tangle of shifting perspectives and sharp turns, and stylistically, is a bit disarming at first.

However, we’re in the hands of an old master. What Dobyns does better than most is capture the quirks and suspicions of small-town America, and similar to his 1997 masterpiece, The Church of Dead Girls, The Burn Palace offers us an eagle-eyed, warts-and-all perspective of residents of Brewster, Rhode Island.

As with the loose-ended Church, the horror lives not so much in the conflict, but rather in how the residents respond to the conflict. In this novel, Dobyns’ first in more than a decade, the catalytic event is a dramatic kidnapping. A newborn has been stolen from the local hospital, replaced with a corn snake, and thus, the town of Brewster is shrouded in mystery and controversy.

From the local diner to holistic healing centers, Brewster is that odd amalgamation of new age/old age found in many small towns. It is also a town of secrets and tragedy and disaster. Dobyns brings to life the town’s diverse personalities, going to door to door in a literary trick or treat.

It’s kind of like Winesburg, Ohio—if Sherwood Anderson had grown up on Stephen King’s street.

Of course, the prose is excellent, and only someone like Dobyns could reconcile this many narratives and POVs in one book. That said, this is a dense work, more so for the constant shifting of perspectives, never setting us on stable ground.

But then again, isn’t that the point? Rather than simply using his words to construct a referent, Dobyns, with his background in poetry, uses the words themselves to disorient, to make us confused, uncomfortable and always uncertain, but excited, about what comes next.